Guaranteed the lowest price for ...

Standalone, so you don’t need a special framework
You need to have a FiveM Argentum key minimum to stream our Mask

Here’s our new public release script: A PlasmaGame (Paintball) script !
We worked very hard on this script, so we hope you will like it as much as we love it !

This script is open source and has no ip lock. Feel free to edit this script as you want but we don’t give support if you modified it.
Only for FiveM.

Play PlasmaGame (paintball) with your friends for up to 20 players !
.

Create your Lobby: You can define the number of players in each team (from 1 to 10.) and define the number of rounds! (from 1 to 5).
There is an instance system, which means that several people can create lobby without interfering with other players already present.
Choice your team (blue or red) !
If a player crash or leave the server, the game will continue without him. (If it’s an 1v1, you’ll be tp out)
Depending on your choice of team, you will be assigned a complete outfit while saving your previous outfit. (A jacket, pants, shoes and one of the two masks -random). Once the game is over, you will get your clothes back.
When all the slots are taken in the lobby, the game starts automatically. You can start the game manually if you want to make some 1v3 (per example).
Shoot once an enemy to eliminate it from the round. Be careful, shooting your allies gives the opposing team a point and eliminates your teammate!
The weapon shoots luminous balls which are quite slow, so you can dodge them.
Win your rounds to be the best at PlasmaGame!

There are no reviews yet.

Be the first to review “Plasma Game / Paintball” Cancel reply 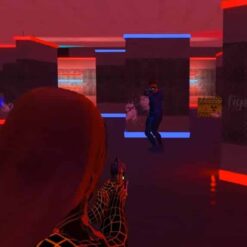